All spaniels looking for a forever home are or will be neutered/spayed, up to date with vaccinations and microchipped.

Please click this link to join our main FB page. 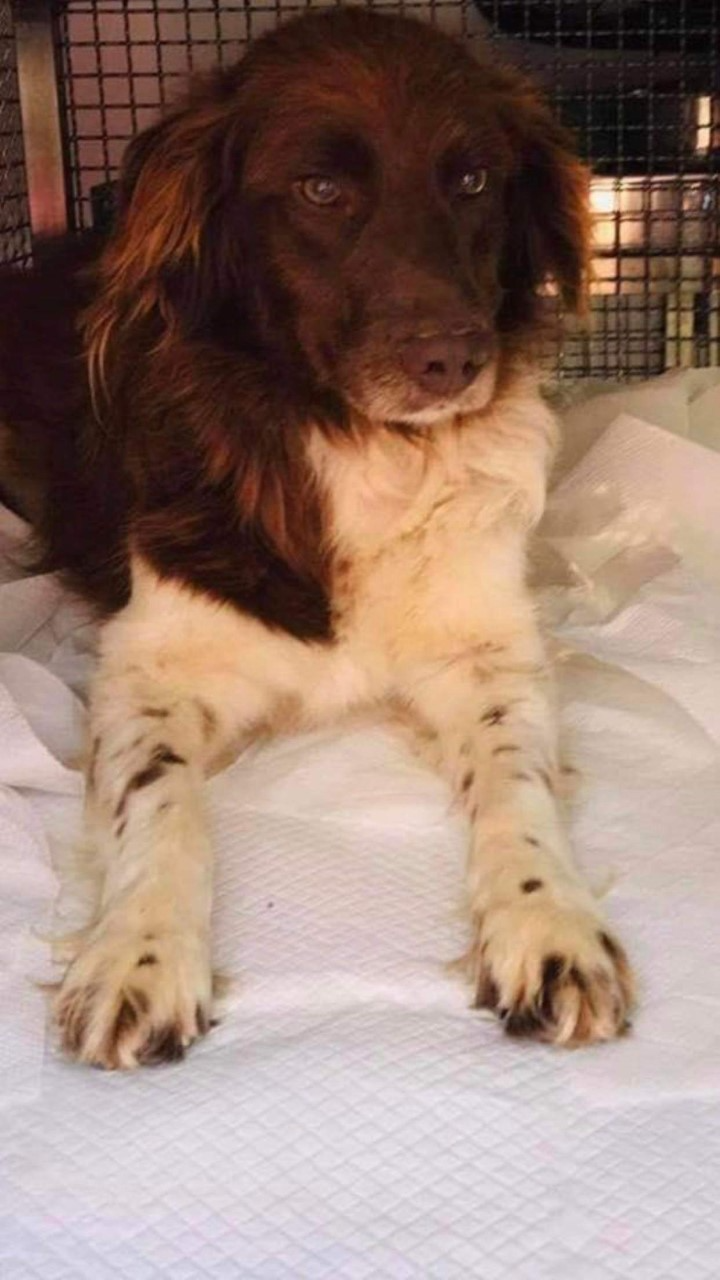 Bitten - yes once when taking treats

Arthur arrived in the U.K. in June this year , he came from a kill shelter at Serbia .

He went straight to a home where he was obviously anxious and confused after a very long journey, there was barking and some growling at first .

He was scared and reacting out of fear and the unknown .

Once he realised that no one was going to hurt him he settled .

Arthur is high energy and can Jump up high , he would need an active home or possibly something to do such as agility .

The write up below is from his current family .

Arthur came to us very frightened.  He is no longer hiding in corners and he now goes by choice into his open crate if he needs to wind down.

Food - he now eats small kibble and has perfect poos twice a day.  However - if he stops eating we give him wet food for a day.  He needs to be encouraged to eat.

His teeth were bad when he arrived but with dental sticks and a pig's ear once a day he has beautiful teeth.

He struggles with ears.  He now lets my son clean his ears with ear wipes every day but never overdo

He is a very clean dog.  He doesn't like water out of a hose or shower (the noise) but in fact he keeps himself very clean.  We have washed him using a sponge when necessary.

Took him to groomer - that is why two of his legs are done and two not!!  He got agitated - might work now if you are with him.

Sleep pattern: he goes to bed about 7 in crate just by indicating cage.  10:30 wee run.  Doesn't like getting up before 9am.  When he came to us he often whined in cage at bedroom.

Two walks - one at 10 and other at 4.  He gets very excited when he sees the lead and harness.  He pulls like a train - we have worked on this - he is now manageable - bad out, good back.  Responds to cheese.

He doesn't seem to have any road sense or concept of danger.  Knows his name and starting to respond.

He is so much better with interactions but a way to go.  Passes people without dogs with no reaction most of the time.  People with dogs on lead he doesn't like.

Other dogs - hard to gauge as he has never been with another dog here. ( he did live with multiple dogs at Serbia ) We guess he doesn't like little dogs that bark.  He is interested in those his size and I suspect wants to play with them.

He is allowed off lead in our garden - mostly interested the edges.  No real recall unless close and interested.  Name and treats.

He didn't understand toys and play when he arrived - he now has several toys he is attached to which will come with him.  Not interested in balls.  Loves to run with you around the garden and house.

He is friendly with us and loves belly rubs which he asks for.

However - never try to put hand in crate or cage.  Territorial.

He is moody - best left alone - let him come to you always.

He has bitten once.  He may have been tired but he came for treats.  He instantly knows when he has done wrong and goes to crate.

People- loves my son and I but wary of husband for no apparent reason.  We have trained him not to bark at postman - as long as he gets an envelope for his toy pile.

Traveling - he has no problems with his car cage but won't get in so lift him by his back legs - not bum.

He is a very intelligent dog with the need to please.  He already knows something is up even though we are trying to keep things normal.

Now he has his confidence back I think  a home where he can interact with other dogs as I think he prefers them to people.

Possibly due to his past life .

He is beautiful - lots of people have stopped and commented.  We will miss him, but know he needs more than we can give.

Although Arthur has been assesed he  will still need time to decompress and adapt to a new environment .

This could take weeks , even months.

He must never be left alone with other pets or children during his adjustment period .